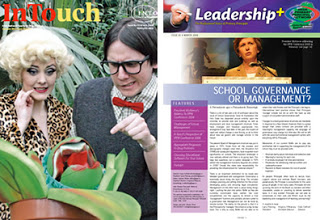 This months INTO InTouch magazine (Issue 92 / March 2008) features a great article by Robbie O’Leary on software for the classroom. Know Your Ireland is featured and gets an excellent write up, “[Know Your Ireland] is another superb example of home-produced software that attains the highest professional standards”.

Know Your Ireland www.edware.ie
This (newly updated) program is another superb example of home-produced software that attains the highest professional standards. It incorporates a wonderfully attractive and stimulating way for pupils to learn everything there is to know about Irish geography. It is extremely comprehensive and contains great photography, web links to Wikipeia and Google Earth, but in particular, a very well designed series of games and activities to help children explore their own country. I particularly liked the feature whereby pupils are given the precise time it took them to complete and exercise, so that teachers can introduce a competitive element.

Robbie O’Leary is principal of a large Dublin school. He is well known for his involvement in ICT in education and has written and lectured widely on the subject.

You can download the entire March 2008 issue of InTouch Magazine from the INTO website, turn to page 37 of the digital version for the article.

The same article was also featured in the March 2008 issue of the IPPN Magazine Leadership+, issue 43. This is great exposure for Know Your Ireland and we greatly appreciate publicity.

The INTO InTouch primary school teacher – trade union magazine has a monthly circulation of 38,000 across the Republic of Ireland and Northern Ireland.